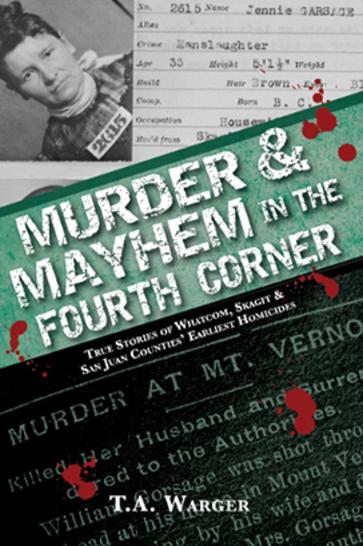 MURDER & MAYHEM in the FOURTH CORNER: True Stories of Whatcom, Skagit & San Juan Counties’ Earliest Homicides is the third book in a series of true crime stories occurring within the confines of Washington State’s northwest corner during the nineteenth and early twentieth centuries. The region has had a vivid history of slayings including: beheadings, shootings, stabbings, poisonings, hangings, strangling, and bludgeoning. The stories within barely scratch the surface.

“My husband came home intoxicated, and proceeded to abuse me. He knocked me down and kicked and beat me. I told him I would leave him and he answered: ‘If you do, I will follow you and kill you.’ The abuse continued until 10 o’clock, when William Gorsage went to bed. “I was sitting in the next room…. when the sudden impulse to kill him came over me. I went and got his pistol, and reaching into the room…I shot him. He is better off than to live the way he did, and I am not sorry for it.”

This volume includes thirteen heinous stories from 1883 to 1941. Read about: How the Northwest’s most notorious outlaw seized the town of Sumas over Christmas, and how the town coward killed him. Mrs. Thomas is discovered buried beneath her potato-patch. To protect his only child, David Long is forced to gun down his wife and son-in-law. Whatcom County’s first public hanging, and the state’s last. A fisherman pulls a trunk from the seabed, and there wasn’t treasure inside. A would-be killer is beaten to death with his own gun. How spousal abuse was handled in 1900 Mount Vernon. Steamboat rivals turn to open warfare on a Skagit wharf. A deadly day on Blakely Island. Madman guns down attorney. He would rather see his wife dead, than work. A woman is found floating in her well. And, it was a train ride to hell aboard the Great Northern.

“For some of us, finding an incomplete story in recorded history produces an itch that simply has to be scratched. As with any local news event, the story rarely gets covered by the news media in a way we consider to be complete. There’s always more to the story. There’s always a back story that hasn’t yet been told about the people involved. There’s always more that can be done to honor those who had a part in the events.”

Rustan Robertson, Author of The Wages of Sin.